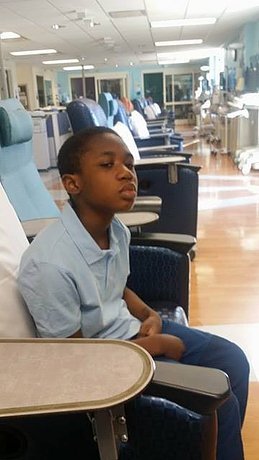 A Zebra is a rare disease that the medical community is unaware of or does not look for as it’s unexpected. How does a parent proceed? I recently interviewed one of our members who like many others has unfortunately found herself in this situation.

Adwoa Adu and her husband have a son, Ivan who has taken a 3 year rough road to a probable diagnosis of Autoimmune Encephalitis. Adwoa met with the “Don’t look for Zebras in Central Park” phenomenon as Ivan’s chief symptom was seizures. He also had other symptoms and personality changes but the seizures were all the Doctors in Atlanta focused on. So Adwoa did what all good mother advocates do and set out to find out what was really going on. Ivan was having 3-4 seizures daily and was exhibiting personality changes. Adwoa browsed on line until she found a paper on AE. She spoke to the doctors at the pediatric clinic who were still not convinced. Adwoa begged and finally insisted on doing an anti NMDA. Later Adwoa heard about a program at Duke University that diagnose and treat AE.

Ivan finally got IV steroids and was seizure free for 3 weeks and then only 2. He goes back to Duke in June. This story is only partly about Ivan. We all know how our children suffer with AE.

This story is about a mother’s desperate attempt to deal with the medical community in fighting for her son’s life. Unfortunately a familiar story for many of our members who have fought their own battles. What makes Adwoa’s struggle a little more difficult is that she is originally from Ghana in West Africa moving to the USA in the nineties. When i asked her about the differences in health care between the two countries she stated that “i feel in Ghana, they would have looked beyond the seizures to his other symptoms.” Looked for Zebras in other words. So overcoming differences in the medical community was yet another hurdle this mother had to face. Their experience at Duke was very different. Dr. Gallentine took an extensive history, and paid attention to what Adwoa had to say. They return in June to see if it’s time to move to another treatment.

When asked how IAES had helped her after having done so much research herself, Adwoa said ”It’s the accurate information available and the other members, their support and stories” An all too familiar tale and yet with a twist. A parent advocate meeting with resistance from the medical community. A mother desperately fighting for her child. But one who first had to take on the doctors and find the information she needed on her own. This story highlights two vital parts of our lives. First the need for quick intervention by a qualified specialist for suspected AE cases ,which IAES membership can help with. And secondly how much our stories can impact each other. Post your stories on the site you never know who you may help and who may help you, including yourself.