Some patients experience a prodromal phase when the disease is developing with symptoms of viral-like or flu-like illness (e.g. headache, fever, vomiting, diarrhoea and upper respiratory tract symptoms), that usually presents 1-2 weeks before the development of psychiatric symptoms. It is not known whether the symptoms are due to NMDAR dysfunction, the systemic immune response to autoimmune disease or secondary responses to a viral infection which later precipitate autoimmune disease as seen in herpes simplex virus (HSV).  A unique finding on an electroencephalogram (EEG), is a pattern called extreme delta brush. This finding, although only present in a minority of patients, will prompt an evaluation for anti-NMDAr encephalitis which in turn leads to a faster diagosis and avoids misdiagnosis and prolonged illness with rapid initiation of treatment. The diagnosis of anti-NMDAR encephalitis is confirmed by the detection of CSF antibodies against the GluN1 subunit of the NMDAR; serum testing is less reliable, with false negative results in up to 14% of cases.  Therefore, it is important that both serum (blood) and CSF (spinal fluid) are tested as spinal fluid is 100% accurate to confirm the diagnosis.

Anti-NMDAR encephalitis affects predominantly children and young adults (median age, 21 years), with a predominance of cases in females (4:1) that becomes less evident after the age of 45 years. In patients below the age of 12 or older than 45 years, there is an almost equal proportion of males and females.  Up to 58% of affected young female patients have an ovarian teratoma.   In men and children, the association with tumors is less frequent. However, neoplasms of the mediastinum (extragonadal teratoma), lymphoma, testicular cancer, and pontine glioma have also been described. In patients older than 45 years, the clinical picture is similar to that of younger patients, but the outcome is less favorable. In this age group, 23% of patients had an underlying tumor (carcinomas instead of teratomas), and delays in diagnosis and treatment were more frequent than in younger patients.

NMDA receptors are proteins that control electrical impulses in the brain. Their functions are critical for judgment, perception of reality, human interaction, the NMDA receptor is essential for the development of new memory and retrieval of memory so patients later have no memory of certain times in their life while the disease was occurring.  Speech production is affected; it is described like aphasia but it does not fit with any type of aphasia.  Children may become almost mute. The control of unconscious activities such as breathing and swallowing, also known as autonomic functions, is impaired.

Compared with adults, children more often present initially with insomnia, abnormal movements, or seizures, both focal and generalized. Seizures can be resistant to antiepileptic drugs (AEDs) and may evolve to status epilepticus or even refractory status epilepticus. Change in behavior such as irritability, temper tantrums, agitation, and reduction of verbal output. Then in the ensuing days or weeks progress to develop a syndrome similar to that of the adults.

Teenagers and adults more often present with psychiatric symptoms, which are present in approximately 90% of cases, including agitation, hallucinations, delusions, and catatonia (~30% of cases) , which may lead to hospital admission for psychosis (45–67% of cases) . The disease progresses in a period of days or weeks to include reduction of speech (mutism), memory deficit, prominent movement disorders becomes evident. The classic movement disorder is oro-lingual dyskinesias with lip-smacking, tongue protrusion, jaw movements, but a diverse range of movement disorders can present. Autonomic instability manifested as excess salivation, hyperthermia, fluctuations of blood pressure, tachycardia, or central hypoventilation. Decreased motor activity and catatonia follow. Following the unresponsive phase, some patients require admission to the ICU and in some instances, use of mechanical ventilation and cardiac pacemaker.

anti-NMDAr Encephalitis has a wide variety of clinical presentations and responses to treatment. Treatment recommendations are based largely on retrospective series and expert opinion since few clinical trials have been conducted.

The current approach includes immunotherapy and removal of the immunologic trigger, such as teratoma, which occur in 58% of females, or other tumors, when applicable. Early tumor removal is particularly important in achieving a good outcome. Most patients with autoimmune encephalitis respond within weeks to first-line treatments which include intravenous high-dose steroids (methylprednisolone), intravenous immunoglobulin, and/or plasmapheresis. anti-NMDAR encephalitis patients are the slowest among autoimmune encephalitis to respond.  About 85% of patients respond to immunotherapy (and removal of an associated tumor if it applies), but it often takes several months or more than 1 year for patients to recover. For the 47% of patients who do not respond to first-line treatments, second-line immunotherapy is started with rituximab (a targeted B-cell therapy) or cyclophosphamide, (an alkylating agent which directly inhibits T cell and B cell proliferation) or both. The outcome of the second-line immunotherapy in patients is improved in 65% of cases.

Nevertheless, severe cases may not respond to standard immunosuppressive and B-cell-depleting treatments.  Bortezomib or tocilizumab may be considered in such cases. Generally, the frequency of improvement is better for patients with tumor (80%) when compared to patients without tumor (48%). Patients without tumors consequently require more often second-line immunotherapy. anti-NMDAR encephalitis patients often develop more severe symptoms and require longer hospitalizations, but 80% achieve a substantial recovery with lasting deficits that allows them to return to many of their usual activities. After immunotherapy and supportive care, the patients may enter the recovery phase after the dramatic acute onset phase, after months of treatment. Recovery of language function and behavioral symptoms occurs at the end. In addition, young patients with anti-NMDAR encephalitis recover better than older patients (81% versus 64%) had a good prognosis after two years of follow-up. Despite this second-line treatment, relapse can occur in 20%–25% of the case within two years of initial presentation but usually with a less severe presentation. Relapses often occur when immunotherapy is reduced or discontinued. There is anecdotal evidence that cases of anti-NMDAR encephalitis can relapse many years after the first episode. Relapses may herald recurrence of the associated tumor or a tumor that was missed in the initial episode. Immunotherapy and treatment of the tumor, if it was missed initially, usually result in improvement. To prevent relapses, immunosuppressive treatment can be continued with mycophenolate mofetil or azathioprine for 1 year.

Perhaps the most important aspect of anti-NMDAr encephalitis is that it is amenable to treatment.  This treatment may take several forms beyond symptomatic treatment of neurological symptoms. Patients with anti-NMDAR encephalitis commonly can recover from a totally unresponsive state to eventually resume a good quality of life.  Recovery is slow and typically occurs in reverse of symptom onset.  The most severe symptoms typically resolve first while the cognitive, behavioral, and memory problems take longer to resolve.

In a 2021 longitudinal study, Carsten Finke, MD,et al  for the cognitive outcome in NMDAR encephalitis. All patients had cognitive deficits about 2 years after disease onset, mainly affecting memory and executive function. After 4 years, moderate or severe cognitive deficits persisted in 2/3 of patients despite good functional neurological outcome, indicating that cognitive function is an important outcome measure in addition to the functional neurological scales. Impaired cognitive outcome was predicted by delayed treatment and higher disease severity. However, continued improvement of cognitive function was observed for several years after disease onset in some patients.

Cognitive deficits are frequent and severe long-term sequelae following NMDAR encephalitis. These deficits show a slow and incomplete recovery and persist beyond recovery of other neuropsychiatric symptoms of the disease.  Prolonged deficits can include, attention, memory, executive dysfunction, impulsivity, disinhibition and sleep abnormalities that can last for a long time; some of which the patient may not recover.

A 2021 pediatric study showed children with a loss of posterior dominant rhythm (PDR) on EEG correlated with a worse mRS score at one year. There is an association of higher CSF titers for teratoma and higher CSF titers and worse outcomes.  High CSF titers can also be associated with relapses. Usually, when the patients start to recover from the autonomic dysfunction, they start getting better. There are some independent predictors of worse outcomes: Requirement of ICU stay, treatment delay over four weeks, no improvement after four weeks of treatment, abnormal brain MRI, and white blood cells greater than 20 cells/microL. All these variables can be given one point each to form a functional score (see: The anti-NMDAR Encephalitis One-Year Functional Status (NEOS) score below).  A higher score is associated with poor functional status at one year from the disease onset, but this should not be used to guide therapy or determine the final prognosis as one-third of the patients with poor functional status at one year may improve at two years.

Patients often have little memory of their illness. Rapid diagnosis and treatment at disease onset as well as for continued and customized cognitive rehabilitation to improve the long-term outcome is of vital importance. A recent systematic review (Cognitive outcomes following anti-N-methyl-D-aspartate receptor encephalitis: A systematic review) found chronic cognitive impairment in up to three-quarters of patients, with timely immunotherapy the most important factor determining positive outcomes.

Overall, 20% of patients develop focal deficits or die from the anti NMDAR encephalitis.

Psychiatrists are often the first doctors to see these patients since anti-NMDAR encephalitis typically first presents with a complex constellation of acute-onset psychiatric symptoms, such as agitation, psychosis and catatonia.

Therefore, psychiatrists have a crucial role in the early recognition of anti-NMDAR encephalitis, and should consider the possibility of an autoantibody-related etiology and become familiar with the red flags and clinical contrasts in anti-NMDAR encephalitis as opposed to schizophrenia and other primary psychiatric disorders suggestive of synaptic autoimmunity as the underlying cause in all cases of first-onset, out-of-the-blue psychosis. Clinical suspicion should trigger early discussion with neurology colleagues, and prompt lumbar puncture testing of  CSF and serum for NMDAR antibodies. Collaborative working supports early diagnosis and timely immunotherapy, resulting in improved long-term outcomes.

In future, routine screening for autoantibodies in patients presenting with psychiatric symptoms may become common practice, and studies are ongoing assessing the potential role of immunotherapy within psychiatry. 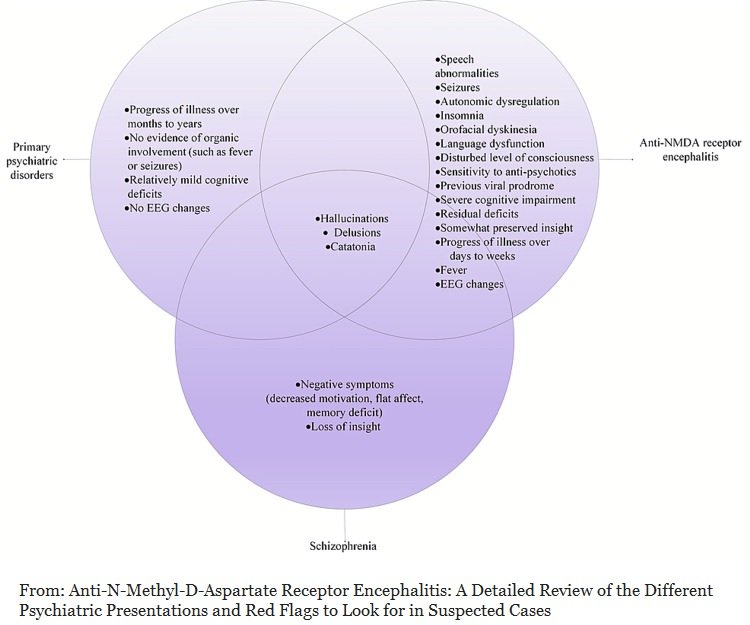 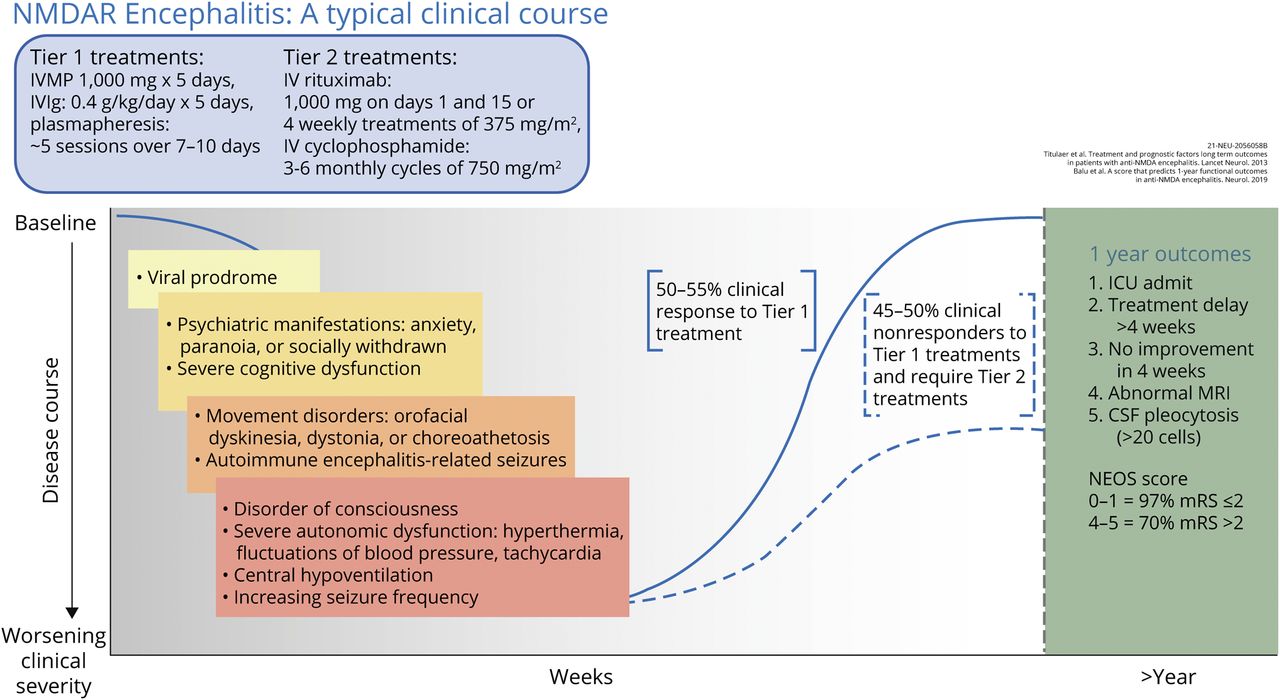 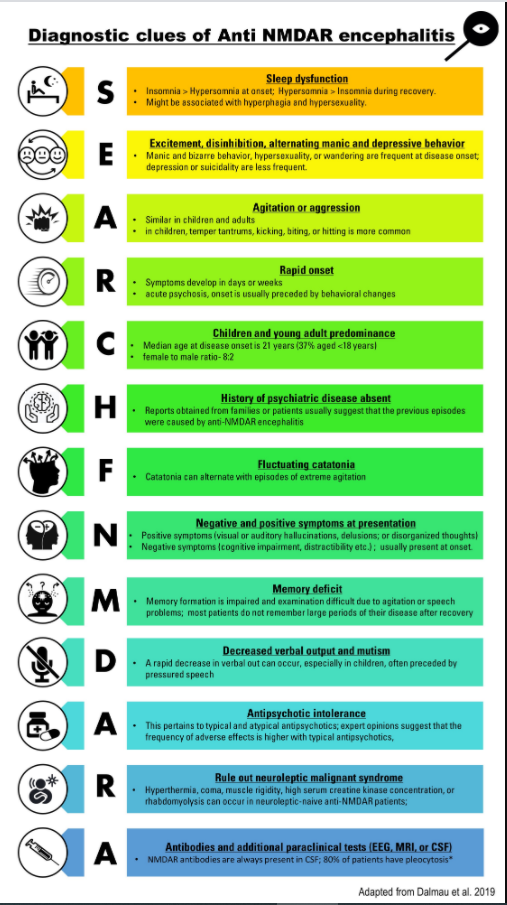 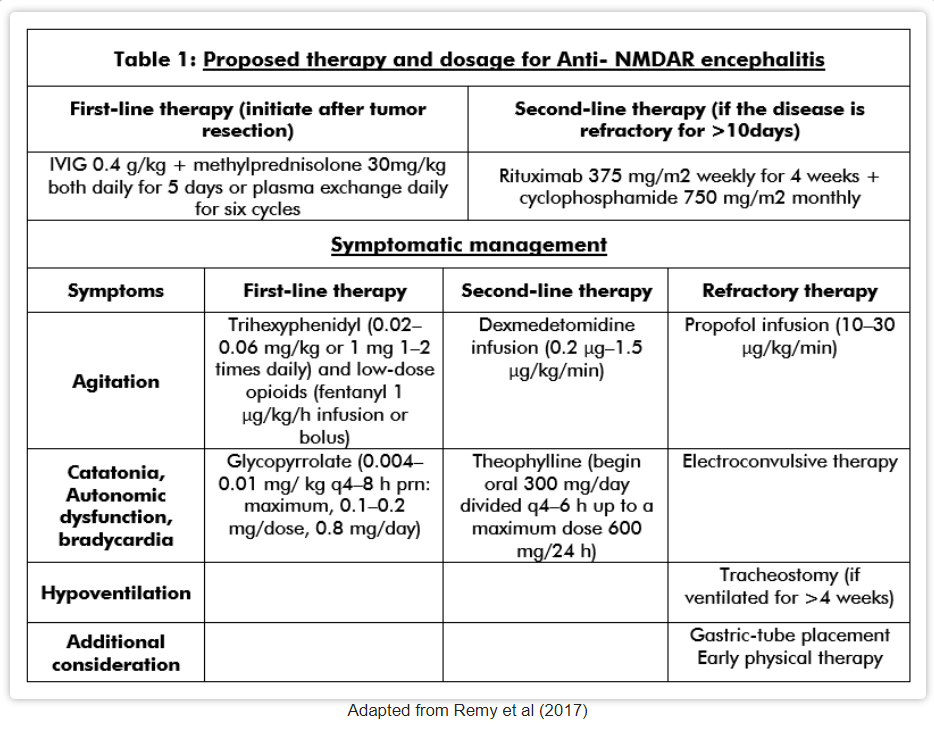 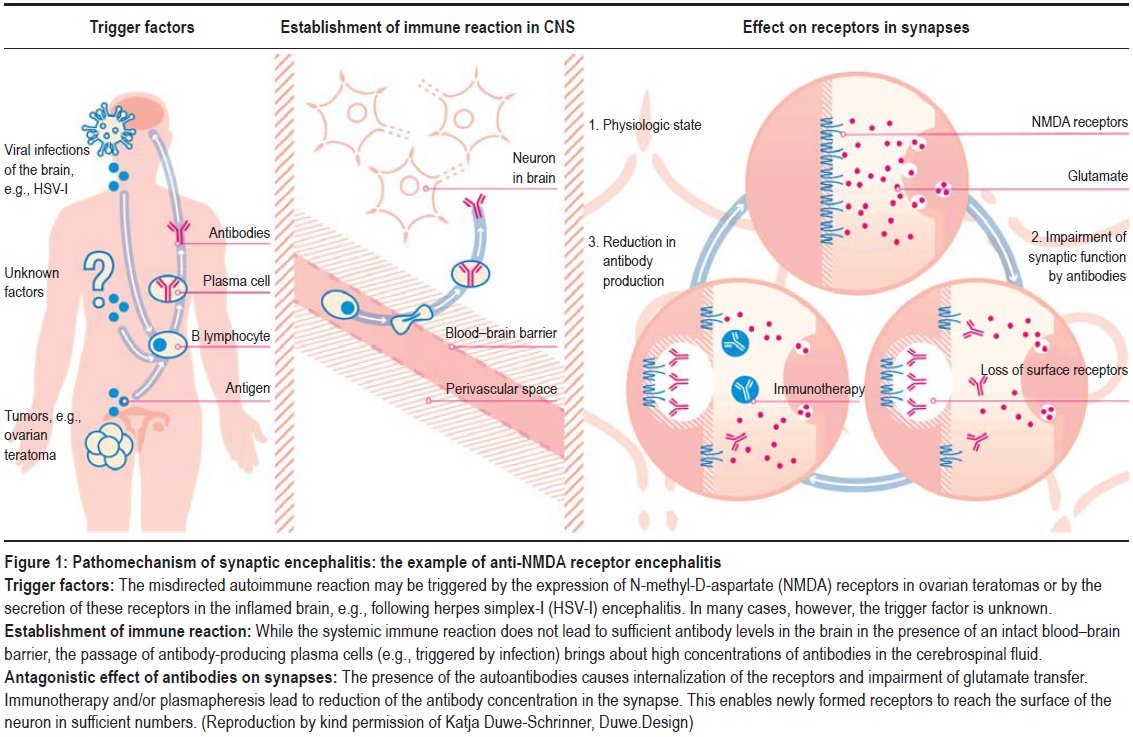 The International Autoimmune Encephalitis Society is proud to be in collaboration with Dr. Mastura Monif, who is a member of the IAES Medical Advisory Board, and her team in the Australian Autoimmune Encephalitis Consortium Project. As part of our collaborative efforts, the team has ‘translated’ their research into a ‘plain language summary’ that patients, caregivers and family members can easily understand. We hope you find this ‘plain language summary’ of  An overview of N-methyl D-asparate receptor (NMDAR) antibody-associated encephalitis helpful.

Hallmarks for early recognition of anti-NMDAr 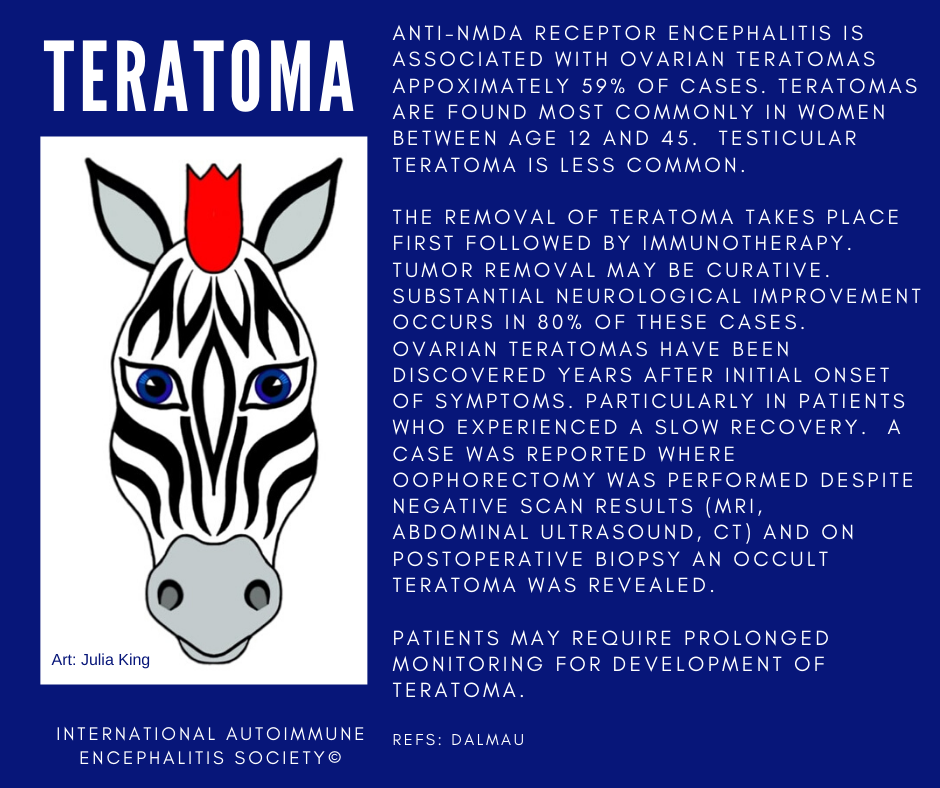 Emily Thomson, a healthy young woman, woke up one morning deluded, paranoid and hallucinating. The Inside Story’s Avery Haines tells us what caused her madness, and how she reclaimed her sanity after 78 harrowing days. 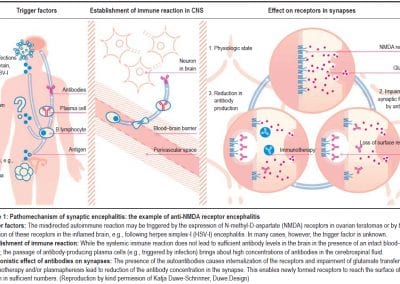 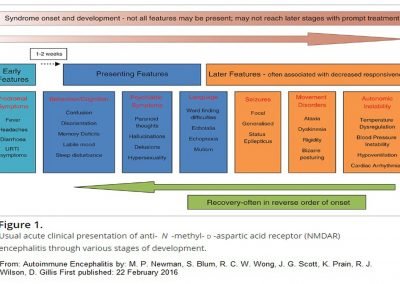 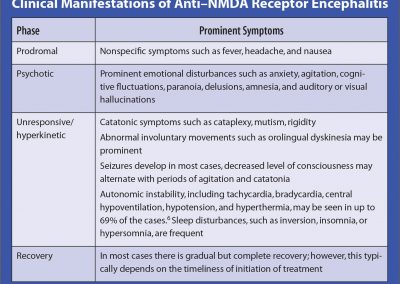 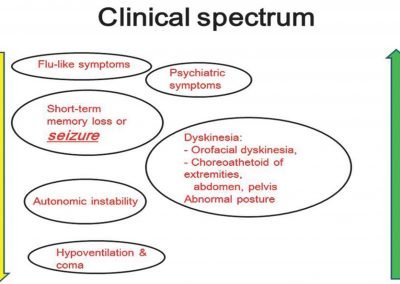 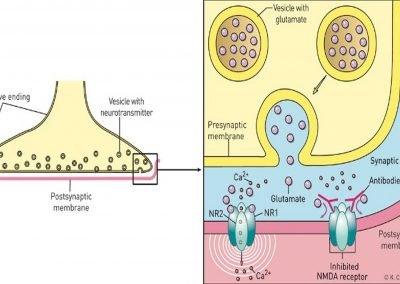 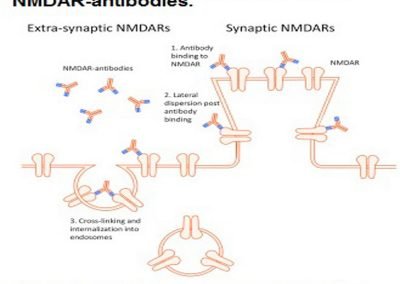 NMDAr due to binding 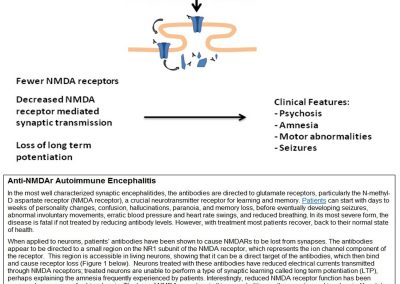