Hi Everyone! Today I thought I would share my story, at least to date. I’m 41. About a year ago I had a gastric bypass and have since lost about 100 pounds. I was the healthiest I had ever been in my life. Happy and really living life for the first time in many, many years. The migraines that had plagued me since my teens were gone. So was the type two diabetes, high cholesterol, etc.

About 3 months after the bypass everything changed. I started getting severe headaches. The kind where you would drop anything in your hands and just grab hold of your head. The kind where you can’t think, can’t eat, can’t do anything but pray the pain would stop. I was seen in the ER on at least 7 occasions. The doctors there just kept saying it was dehydration, the rapid weight loss from my bypass, and/or my migraines. They would not listen to me when I told them this felt nothing like the migraines that I have had all my life.

At the same time, myself and my family began noticing other changes. I was dizzy all the time. Walking in to walls at work, stumbling, and getting tunnel vision. My husband noticed changes in my speech, especially when I was tired. I would stutter, have trouble finding my words, or completely blank out in the middle of a sentence and not remember what I was going to say. Finally, on July 28, 2017, I went in with the worst headache I had ever had. The doctors, tired of seeing me, finally decided to order and MRI. The MRI showed 3 white matter brain lesions; #1 in the right superior parietal lobe, #2 in the left peritoneal region, and #3 in the left temporal parietal lobe. One of the left lesions looks like a MS type lesion, however the other two do not. I was admitted to the hospital and the doctors started looking for a cause.

Over the next 10 days I stayed in the hospital. The headache did not let up. The doctors ordered two different courses of High dose steroids, solumedrol and Depacon. I had no relief from either course. They also did multiple rounds of MRI’s, CT scan, blood work, and a lumbar puncture. The LP was positive for 2 oligoclonal bands. With no idea what was going on, I was discharged on day 10. By this point, I could not walk without assistance. I was prescribed stability crutches. I have rapid weakness, spastic reflexes, fatigue, head pain that is constant around the base of my skull, with multiple episodes of severe stabbing pain all over the crown of skull every day. I am dizzy and have vertigo 24/7. I have increasing difficulties in social situations and public spaces. I have tremors, and spasms that make my whole-body jump. I have insomnia. Bright light, moving lights and colors, and music all increase the head pain. I have stabbing pain behind my eyes that make my vision blur and eyes water. I have nausea and vomiting multiple times a week.

In October the doctors sent an encephalopathy panel to the Mayo Clinic for testing. I am NMDA negative, but positive for N-Type VGCC. This spurred them to do more CT scans to check for cancer. At this point they told me they suspected Autoimmune Encephalitis. The CT showed that I had an ovarian remnant left from a previous surgery as well as two tumors (believed to be endometrioma) on the left side and a small mass in the right abdominal wall. PET scan showed no activity in any of these locations and all masses are believed to be non-cancerous. I have also had a MOG test sent to the Mayo Clinic, but have not received any results from that testing. Currently, we are only treating symptoms. Gabapentin for the tremors and headaches, which does little to nothing. Trazadone to help me sleep, and promethazine for the dizziness. I am undergoing surgery on February 20th to remove the ovarian remnant and all 3 masses. My Endocrine Gynecologist does not believe that the masses are causing any of the Neuro problems. His notes state “Concern by neurology that ovarian remnant or tumor could be secreting a chemical causing her encephalitis. Low suspicion by OB/GYN for the remnant appears to be an endometrioma which are not known to produce these sorts of chemicals or hormones.” However, we are going forward with surgery to rule this aspect of the disease out.

All of my treatment is through the University of Iowa Hospital. I don’t see my Neuro again until a week after surgery. Thanks for sticking with my long story. I just don’t know what to do next or how to proceed. I’ve lost so much to this in the last six months. I’m basically housebound. I cannot drive, I lost my job, and my independence. I’m frustrated and constantly scared. Always waiting for the next bomb to drop.

Heather contacted International Autoimmune Encephalitis Society for help, support, and guidance. She has recently joined the Int’l AE Society Educational Support Group designed for patients with an AE diagnosis and their support people. We will be helping Heather through her journey and guide her in getting the best treatment possible for a best outcome. 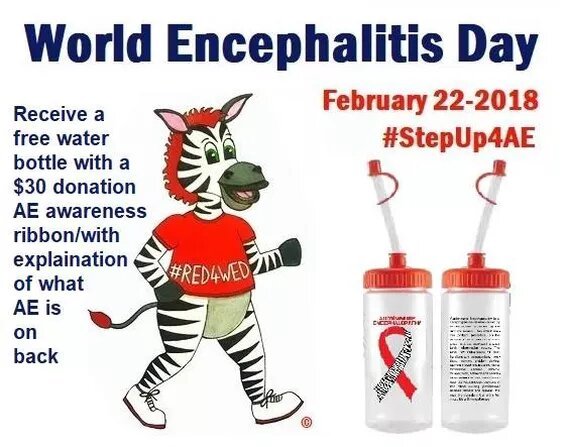