When the judge has read the book… 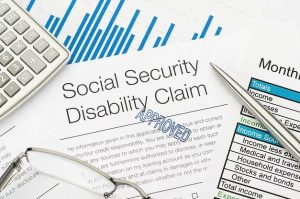 I just got a favorable ruling from Social Security Disability that I meet their criteria due to my having anti-NMDAr Encephalitis and other autoimmune conditions.I initially applied in 2015 and after a long battle with appeals and 2 hearings, I won!

Here are my take home messages:

1.     Apply for yourself, have someone do it for you, or apply for your loved one as soon as there is a diagnosis.

2.     Report all medical conditions, not just autoimmune encephalitis. Surprisingly, my case was approved more for my Crohn’s Disease and other autoimmune conditions than the anti-NMDAr, but all of these conditions were complicating each other.

3.     Don’t give up if you are at first denied. Appeal. Hire an attorney that only takes a small percentage and only if you win. I think mine only made $6000 from my case.

4.     Make sure your doctors write in the record the things you tell them about. Like fatigue, confusion, anxiety, depression, slurred speech, vision issues, etc. and give them exact examples of how it affects your everyday life. Better yet, write your list of symptoms out and ask/make them file it in your medical record. Or, track a “typical day” for a week or longer and show it your doctors.

5.     Have others who live with you or observe you, tell the doctors what they see with their own eyes or ask them to write it down so the doctor can put it in your record.

6.     The biggest thing I learned in this process, is that they don’t award disability based on just a diagnosis. It has to be in your medical record how it is affecting you day to day to the point that you “couldn’t sort pencils” as my attorney always said. As we all know, before encephalitis is properly diagnosed and appropriately treated, “sorting pencils” is probably not even possible. (It still may not even be possible during recovery either for that matter!)

Keep up the good fight.

Oh, and my judge read the book “Brain in Fire”, so awareness is spreading everywhere! 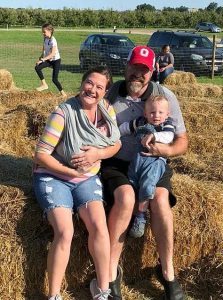 You generous Donations allow IAES to continue our important work and saves lives!

The Loneliness of Invisibility

Back in my day, diseases were visible.  Of course, we only knew about maybe 20 or 30 of them personally, and were totally oblivious to everything else. Chicken pox at 3 years old – you could see them, scratch them and pull off the scabs scarring yourself for life.  Tonsillitis – your throat hurt and swelled and turned red and you couldn’t eat a thing.  Mumps – oh I remember when my sister had them.  She was sick and looked just like a chipmunk.  A few years later in Junior High and High School kids were dropping right and left with appendicitis, dislocated body parts from sports injuries, and mono.

These illnesses were things we could observe, identify and find accessible treatment for. They were common.  Everyone knew about them.  Tea and sympathy were generally available from family and friends (except for the mono jokes) and even teachers, who would send home assignments along with nice little notes to the patient.  So, it was crummy to be sick, no one liked it, but you knew it would pass and, in the meantime, most people, including doctors, treated us all fairly well.

Imagine my surprise and dismay when at age 47 I became so ill I couldn’t function most days.  My throat wasn’t sore, I had no rash, and nothing appeared broken. But I had terrible headaches, my vision became increasingly strange, even to the point of seeing things no one else saw,  and body pain was unrelenting.   I lived in a black hole of depression.  My wonderful job became impossible to do because my memory only worked well occasionally.

I went on disability and started a 15 year journey looking for a diagnosis, getting sicker along the way, rebounding enough now and then to think “Aha!” it’s over, only to crash again and move deeper into depression and hopelessness and a loneliness I’d never experienced before.  The invisible illness of Autoimmune Encephalitis had me in its grips and no one had a clue.

To have an invisible disease like AE is to be very lonely. What you had, in many cases, is just gone – standard of living, often relationships, and most certainly who you seemed to be. One physician after another puts forth a theory and gives you medicine which makes you sick, then tries another theory and the same thing happens. The doctor may become frustrated and turn it back on you, the hysterical woman or hypochondriacal man. If you’re a child it all might be blamed on your mother’s Munchausen Syndrome.

Meanwhile you get sicker and sicker. I was dumped in the psych unit twice because the medicines I’d been given made me crazy. Five neurologists thought I was just nuts, or a complainer.  Other specialists just threw up their hands, and several were even kind and sympathetic in their helplessness. I got a new PCP and sobbed through yet another horrible history tale. She was silent when I finished, and I just sat there. Loneliness. 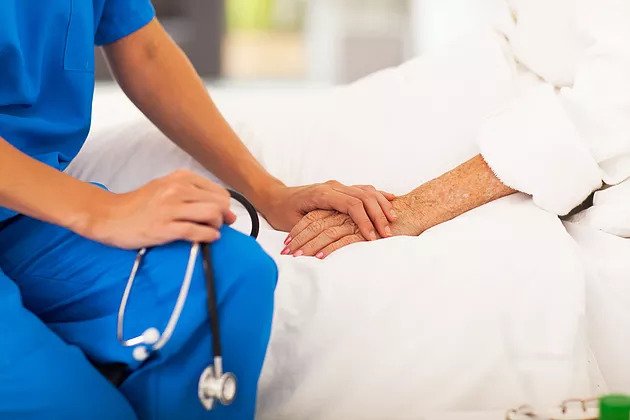 She finally took my hand and said softly, but with conviction, “Diane, you are not crazy. Something is badly wrong, and I don’t know what it is, but we are going to find out if I have to send you to every major hospital in the country. The most healing words I’ve ever heard.  I still cry when I remember that moment.

That was in 2012 and Autoimmune Encephalitis was only identified in 2007. My wonderful new Cleveland Clinic neurologist told me autoimmune encephalitis was rare and that the type of antibody I have is also rare.  He explained that the course of the disease was progressive, and remitting-relapsing.  I don’t know how much of that I understood at the time.  I was just so happy to have a name for it that I hugged my doctor as I left.  Weird to be thrilled to have a life-threatening disease.

If you are an AE Warrior, or the friend, parent, family member or caregiver of one, I know you understand the loneliness of invisible illness. Loneliness with a capital “L”. When well-meaning people say “Oh, great, you had your IVIG Friday, you must be feeling great!” or “Cheer up! It can’t be that bad.” “You’ve still have your husband/wife and your kids”, “All of us forget things from time to time.”, “Go to a yoga class and your balance will be back in no time.”, or if the patient is a child, I once heard, “She’s young and kids bounce back from things.” ……” and so on. All meant to be well meaning comments.

LONELINESS hits you right in the heart. Whether it’s being said to you or to the people who love and care for you, it makes hanging in there and struggling toward recovery so much harder. 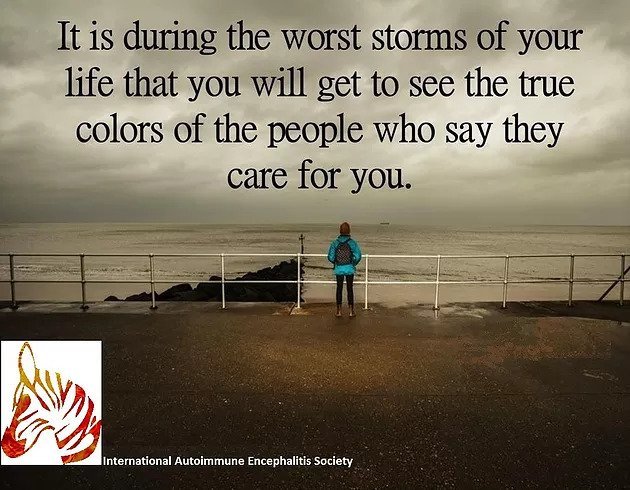 That’s why the International Autoimmune Encephalitis Society is so important to me. The support, love and education it provides keeps me hopeful and the friendships I have developed help with that Loneliness.  I understand that people in my life mean well, but their comments injure me over and over because they just don’t get it. Invisible illness is everywhere.  We have one version of it and know the terrible costs it extracts. We understand how critical it is that we use every moment as a teachable moment to help all those other folks out there understand what Autoimmune Encephalitis is and how much we need their support.

IAES is there for us.  If you are at all able to help with the growing number of very frightened, LONELY people navigating autoimmune encephalitis, please contact IAES about volunteer opportunities.