How does Sleep Affect the Blood-brain Barrier?

Autoimmune encephalitis (AE) is the name for a group of conditions that occur when the body’s immune system mistakes its own healthy brain cells for invaders, leading to brain inflammation that ultimately triggers a number of other symptoms. Normally, the body’s immune system has only limited access to the brain, as it is protected by the blood-brain barrier (BBB). When this barrier is healthy, it can prevent an immune system attack by blocking immune cells and antibodies targeting brain cells from actually entering the brain. Like any fortress, however, the BBB isn’t completely impenetrable. Given that AE symptoms occur when immune cells or antibodies manage to cross the BBB, researchers think that the weakening of this barrier plays a critical role in AE and may even be a target for future therapies to reduce or prevent AE symptoms. But what causes the BBB to weaken, allowing cells, antibodies, and other molecules to invade the brain?

The blood-brain barrier: gatekeeper of the brain

Before discussing how the BBB becomes impaired, we need to understand how the healthy BBB functions. The BBB is often referred to as a “gateway”, made up of tightly joined endothelial cells that surround the blood vessels in the brain and spinal cord1. Outside of the brain, the endothelial cells lining blood vessels have small spaces between them, allowing for the exchange of substances between the blood and the surrounding tissue. However, the endothelial cells of the BBB are connected to each other by proteins called tight junction proteins, which squeeze the cells tightly together, blocking larger cells and molecules from freely flowing between the blood supply and the brain (Figure 1). 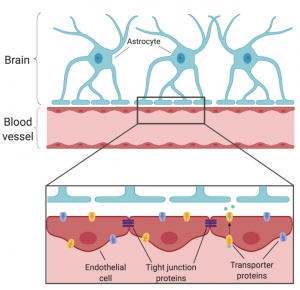 Figure 1: The blood-brain barrier is made up of endothelial cells that are tightly connected to each other by tight junction proteins (purple). These tight connections prevent unwanted substances from traveling between the blood and the brain. Different types of transporter proteins (yellow & blue) shuttle only certain types of molecules between the blood and brain.

The BBB is selectively permeable, meaning it allows only certain substances to enter and leave the brain. One way that molecules can cross the BBB is by endocytosis, a process where the endothelial cells uses its cell membrane to take in a molecule on one side (say, the side facing the blood) and pass it through to the other side (facing the brain) where it is released1. The endothelial cells of the BBB also express a variety of transporter proteins, which actively move molecules between the blood and the brain (Figure 1). Additionally, small, fat-soluble molecules can cross the BBB without any help from endocytosis or transporter proteins, giving the brain access to important nutrients and energy sources1.

BBB permeability changes across the day

The permeability of the BBB is not always the same, however. Research has shown that its permeability actually changes depending on the time of day2. Like many cells in the body, BBB cells are controlled by circadian rhythms, biological processes that cycle roughly every 24 hours. These rhythms are driven by a molecular “clock” within each cell, and cells across the body are synchronized by the “master clock” located in the brain.

What do these rhythms mean for BBB permeability though? Interestingly, research in both flies and mice shows that the amount of hormones, inflammatory proteins, and other molecules that cross from the blood into the brain fluctuates across the day, with peak BBB permeability occurring at night2.

Circadian rhythms aren’t the only daily process that affects the integrity of the BBB. Sleep—or more appropriately, lack of sleep—is also known to affect the BBB’s protection of the brain. This relationship between sleep and the BBB is increasingly important as sleep restriction becomes more and more common in our modern society.

Sleep loss is also highly relevant to the AE community. One study found that 73% of AE patients surveyed reported sleep disturbances, including gasping/snoring and insomnia. Even further, patients with AE had decreased total sleep time and increased fragmentation of sleep compared to people without AE3. But how exactly does sleep loss affect the BBB?

Figure 2: After periods of sleep loss, the blood-brain barrier is negatively affected in many ways (left). Inflammatory signaling caused by TNFα and IL-6 increases, leading to the breakdown of tight junction proteins (purple). This causes gaps between endothelial cells, allowing unwanted immune cells and antibodies to enter the brain. After sleep loss, the endothelial cells also make fewer of the transporter proteins (blue and yellow) that are required to shuttle necessary molecules between the brain and blood.

Multiple studies have now shown that sleep restriction weakens the BBB. One reason is due to the increase in inflammatory signaling that results from extended periods of wakefulness. Increases in inflammatory proteins, like TNFα and IL-6, are known to break down the tight junction proteins that keep the endothelial cells tightly joined together2 (Figure 2). Sleep-deprived mice and rats showed decreased numbers of tight junction proteins, leading to increased BBB permeability.

In addition to weakened tight junctions between endothelial cells, sleep loss also increases permeability by enhancing the rate of endocytosis across the BBB2, meaning that the endothelial cells shuttle more molecules from the blood into the brain. Relevant to AE, this increased permeability means that more immune cells and antibodies can enter the brain after sleep loss compared to after a full night’s sleep.

While these results are a bit frightening, there is good news. All of the damage to the BBB caused by sleep loss returns to normal after getting enough sleep! One study found that even an extra 1-2 hours of sleep following sleep loss restored BBB function in most brain areas4. Given even more time to sleep, the BBB throughout the brain returned to normal function5. These results suggest that treating the sleep disorders commonly associated with AE may help strengthen the BBB, increasing the brain’s protection against the immune system’s cells and antibodies and improving long-term outcomes for patients.

The BBB as a treatment target

Given that AE is caused by immune cells and antibodies infiltrating and attacking the brain, researchers are now looking at the BBB as a potential therapeutic target1. Treatments that strengthen the BBB will hopefully reduce the number of immune cells and antibodies that make it into the brain, and may also increase the effectiveness of some AE medications, such as anti-inflammatory drugs or immune-suppressants. Because these AE medications are specifically designed to cross a healthy BBB and access the brain, strengthening a weakened BBB will protect against molecules that aren’t supposed to be in the brain, while still allowing the necessary medication in.

The known circadian effects on BBB permeability can also be used in determining when to give medication that needs to cross the BBB. Medication can be given at the time of day when BBB permeability is highest to increase the amount of drug that makes it into the brain. In fact, this has already been studied with anti-seizure medication in epilepsy. For instance, in both flies and humans, when medication was given at night during peak BBB permeability, it was most effective at controlling seizures6,7.

This new strategy of “chronotherapeutic” dosing schedules has the potential to improve the efficacy of medication in many diseases. By administering drugs when it is easiest for them to enter the brain, doctors may be able to see results at lower doses of the drug, potentially reducing the risk of harmful side effects. As we continue to learn more about the BBB, scientists may identify even more ways to improve BBB health in the many disease states where it is compromised.