February 22nd is World Encephalitis Day.   Due to the rarity of this disease, it is important to tell my story as it often takes many months to reach an accurate diagnosis and begin treating this disease.  The more people that know about this disease, both medical professionals and family members, the more likely we are to improve patient outcomes.  Since I started telling my story in January, I have already met a Houston family whose daughter is being treated for presumptive AE, and I’ve been helping a friend in Singapore who is a school counsellor learn more about AE as one of her students has AE and is struggling.

Every patient is unique in their journey but there is often a common thread. Looking back, I know that my symptoms started in September 2016. I started experiencing numbness and tingling in my forehead that spread under my eyes, as if I was wearing a mask.  In late May 2017, I also started having numbness and tingling down my left side, affecting my left arm and left leg.  I would have moments where I would be walking or talking or eating and I had to pause to let a strange feeling kind of wash over me. As a family, we started calling these moments “episodes” and I would just pause what I was doing for a few seconds until it passed.  I wouldn’t know until months later that these “episodes” were actually Partial Focal Seizures and I was having 40+ a day.  I was diagnosed with a seizure disorder, Epilepsy, shortly after I had a Grand Mal Seizure in July 2017.

I was put on several different seizure medications to try to control the seizures.  The combination of seizure drugs eventually reduced my seizures to about 10 a day but I had increasing fatigue and was starting to show signs of short term memory loss, aphasia (where you can’t find the right word when speaking or writing), and problems with my walking – my left leg would limp and drag.  An MRI showed possible Limbic Encephalitis so I was treated with IVIG infusions and this stopped me from having seizures on October 25, 2017.

Unfortunately I continued to decline and was admitted to Houston Methodist in December 2017 for five days of steroid infusions.  My condition deteriorated so rapidly that I was now dependent on a walker to get around the room.  I was very weak and we were very worried. I would spend the next 6 months attending five hours of therapy a week, gradually reducing to two hours a week by May 2018.  It took a lot of work to graduate to using a cane 3 months later and then gradually giving up the cane too.

Everything we were learning about AE indicated that early and aggressive treatment led to the best outcomes.  Were we doing enough only with the hours of therapies each week? We decided to seek a second opinion at Duke University Medical Center.  After the results of another Lumbar Puncture (spinal tap), blood tests and another MRI, I was finally diagnosed with LGI1 Autoimmune Encephalitis.  I now receive infusions of Rituximab every 6 months to teach my body to stop making these antibodies.  Hopefully, one day I will no longer need these costly infusions but current research indicates that the relapse rate is high and we just don’t know how long I’ll need treatment.

It is now January 2019 and I am proud of the huge gains I have made over the last year.  I no longer use a walker or a cane and recently started walking about 2 miles about 5 times a week.  I continue to go to TIRR (Texas Institute of Rehabilitation and Research) for Physical Therapy twice a week to work on regaining the strength that I have lost.  I started driving again last September, although I rely on my friends, children (now two of them drive) and my husband to do most of the driving.  I am only comfortable driving in a bubble between my home, Wholefoods and my children’s school (about 7 miles end to end). 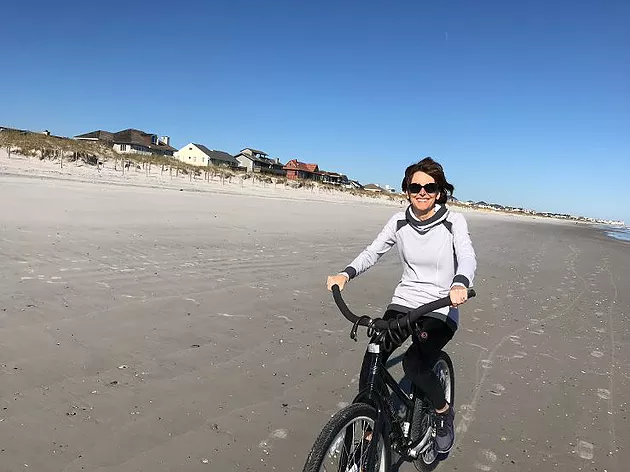 This stage continues to be challenging, but in different ways than 2018.  Now my disease is largely invisible, except to my family and closest friends. I suffer from Brain Fatigue and have to be very careful to not over commit or over extend myself daily. I have become good about saying “that doesn’t work for me” when managing my commitments. I get headaches more frequently than I ever did and I still battle fatigue. When I am physically tired, Brain Fatigue affects me by causing aphasia and short term memory issues as well as gait changes where I begin to limp and drag my left leg again.  I tire very easily driving and even being a passenger in a car can be exhausting for my brain. Being in a room where multiple conversations are occurring is very challenging for me as it is difficult to filter out the extraneous noise and focus my attention. But most of these effects aren’t outwardly visible and that is what makes it challenging.

I will be forever grateful for my ultimate diagnosis and recovery to date. I will be forever grateful that my children called 911 and my husband and family never gave up hope and advocated tirelessly on my behalf for diagnosis, treatment and aggressive rehabilitation. And lastly, I will be eternally grateful that I never, even in my darkest days, gave up hope for recovery.  I somehow always believed that this wasn’t going to be the end of my story.

It is important for me to tell my story.  World Encephalitis Day is February 22 and the more people that know about this disease, the greater the likelihood of faster diagnosis and treatment. Thanks for sharing my journey.

Become a card carrying member of International Autoimmune Encephalitis Society. For as little as $20 a year, you can become a ‘Basic’ member.  Your membership includes a small gift of thanks from IAES along with your membership card.