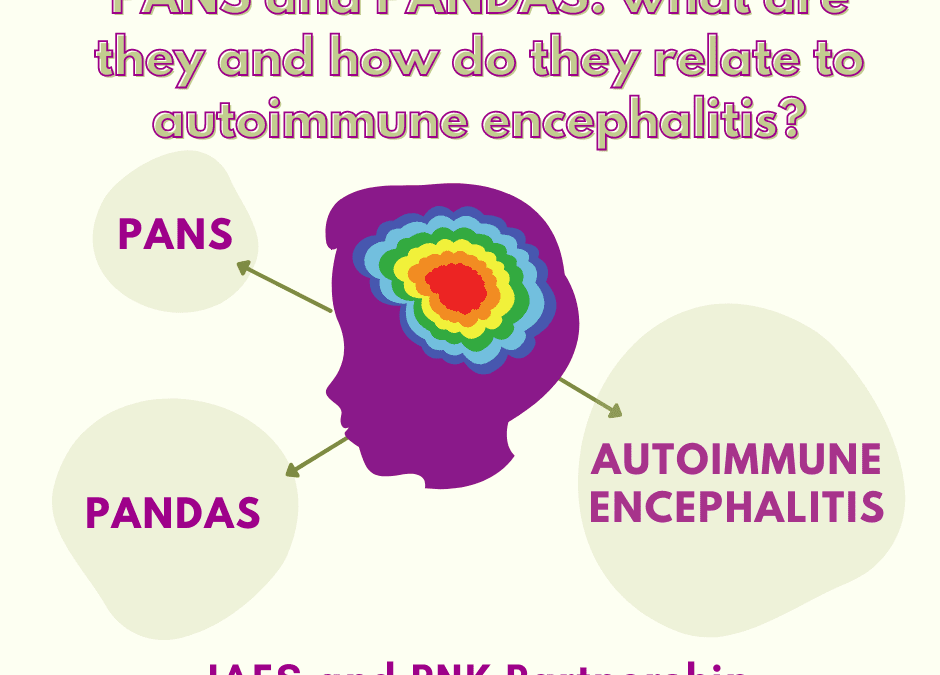 PANS and PANDAS: What are they and how do they relate to autoimmune encephalitis?

PANS and PANDAS: what are they and how do they relate to autoimmune encephalitis?

Pediatric Acute-onset Neuropsychiatric Syndrome (PANS) is an autoimmune condition that occurs in children as young as three years old1. It is difficult to know how common PANS is due to the difficulty in diagnosing this relatively newly-recognized disease. PANS results in a very rapid (seemingly overnight) development of obsessive-compulsive behaviors in previously healthy children. Behavioral symptoms can also include separation anxiety, irritability, screaming, emotional and developmental regression, and even depression and suicidal thoughts1. The sudden onset of these symptoms can be terrifying for children and parents, making early diagnosis and proper treatment critical.

PANS occurs in a small subset of children in response to a bacterial infection. If the cause of the psychiatric symptoms is determined to be a streptococcal infection (the bacteria that causes strep throat), the disease is called Pediatric Autoimmune Neuropsychiatric Disorders Associated with Streptococcal infections (PANDAS), which is a specific kind of PANS. However, a child can also develop PANS after contracting other infections like the flu, varicella, or herpes simplex virus1. PANS and PANDAS are typically very difficult to diagnose because the initial bacterial infection is often asymptomatic. For example, it is common that a sibling or classmate of a child with PANDAS was previously ill with strep, but the child who has PANDAS did not show symptoms at that time2. Because of this, the infection can go undetected and untreated, often for months, until psychiatric symptoms arise2. It is not yet clear why some children develop PANS/PANDAS and others do not. It is possible that some strains of bacteria can be more or less likely to cause PANS. Genetic differences in the immune and nervous systems have also been considered as potential risk factors2.

PANS and PANDAS are autoimmune diseases because they involve a hyperactive immune response that attacks the brain. Streptococcal infection is a common cause of PANS because the virus that causes strep mimics human cells in order to “hide” from the human immune system1. Because of this, antibodies that are made to target the virus can target human proteins as well. In PANS and PANDAS, the antibodies cross into the brain and start attacking brain cells, which results in the psychiatric symptoms.

It is not fully understood which antibodies are produced in PANS and what proteins in the brain they target. Studies in mice and rats show that antibodies produced in response to a streptococcal infection targeted a receptor for the chemical dopamine in a region called the striatum3. Interestingly, dopamine signaling in the striatum is thought to be dysregulated in obsessive-compulsive disorder, and mice that were given these antibodies developed obsessive behaviors similar to those observed in PANDAS3. However, studies that attempted to isolate a specific marker for PANS or PANDAS have not been successful, making it likely that the conditions can be caused by a variety of antibodies1. Unfortunately, the lack of a consistent biological marker adds to the difficulty in diagnosing PANS and PANDAS. Doctors use the symptoms themselves along with a detailed patient history that might suggest a previous asymptomatic infection1.

How is PANS treated?

Once a PANS/PANDAS diagnosis is made, a pediatrician will begin treatment by focusing on both the underlying cause and the psychiatric symptoms of the disease. Treatment of the underlying cause is simply a course of antibiotics to kill the infection. Though psychiatric symptoms may improve with antibiotics, children may also require cognitive behavioral therapy (CBT) to address lingering obsessive-compulsive behaviors. In some cases, treatment may also include immune modulators to try to prevent the antibodies from attacking the brain1,4.

Though many children fully recover, it is common for children to have flare-ups of symptoms when a new infection occurs. Long-term antibiotics can be used to prevent future infections if flare-ups are common, along with CBT and immune modulators4.

There are many similarities between PANS/PANDAS and autoimmune encephalitis (AE). Both conditions involve an immune attack on the brain’s own cells that can cause rapid-onset psychiatric changes. AE can be caused by a bacterial or viral infection like PANS/PANDAS, though it can also result from tumors or cancers5. Both conditions are extremely difficult to diagnose and are often misdiagnosed. However, the pathology of AE is better understood than that of PANS/PANDAS, making it easier to test for. In addition, the symptoms and course of PANS/PANDAS distinguishes it from pediatric AE. AE symptoms may include fever, seizures, and cognitive impairment that are not typical in PANS/PANDAS. AE symptoms also progress more slowly, while PANS/PANDAS symptoms appear rapidly, do not necessarily worsen over time, and often retreat rapidly6. Though the symptoms may differ, treatments for AE and PANS are quite similar and include removal of the source of the antibodies either pharmacologically (antibiotics) or surgically (removal of a tumor), suppressing the overactive immune system, and addressing the symptoms (CBT). As research continues and more physicians become aware of acute-onset autoimmune diseases, early diagnosis and treatment will greatly improve the lives of both children and adults that suffer from PANS, AE, and other similar syndromes.