As the name suggests, autoimmune encephalitis (AE) is a group of diseases in which the body’s immune system attacks the brain.  To treat it, there are a variety of therapies that target different aspects of the immune system.  The goal of these immunotherapies is to reduce brain inflammation and the resulting symptoms, as well as maintain these improvements by preventing relapses1.

Immunotherapy is most successful in patients with antibodies against cell-surface proteins (such as NMDR, LGI1, and Caspr2).  These diseases tend to be caused by B cells and autoantibodies.  In contrast, when antibodies are directed against molecules inside of cells (such as Hu, Ma, or GAD65) the disease is usually mediated by T cells, and these patients typically do not respond as well to immunotherapy.  It should also be noted that removal of any disease-associated tumors, such as the ovarian teratomas frequently seen in NMDAR encephalitis or tumors seen in patients with intracellular antigens, should be an early treatment priority as removal quickly produces improvements2.  However, there are currently no standardized treatment guidelines; at present, different regimens are used based on the patient’s particular condition and clinical status, as well as the opinion of their doctor. 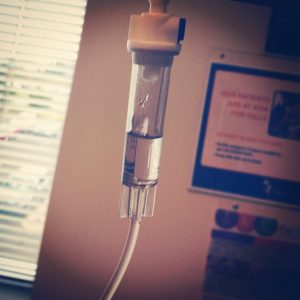 The first treatment for most patients is typically steroids, also calledcorticosteroids.  Corticosteroids act to broadly inhibit inflammation in multiple ways, which results in the depletion of mainly T cells.  They offer the additional benefit of restoring the blood-brain barrier (BBB), which can be impaired in

AE. However, corticosteroids aren’t perfect.  They have many side effects, and can aggravate or even induce psychiatric symptoms associated with AE such as depression, insomnia, agitation, and psychosis.  What’s more, corticosteroids do not target B cells, the cells that go on to produce the antibodies that cause many of the symptoms of AE3.

Two other first-line therapies do target autoantibodies.  One is administration of intravenous immunoglobulin (IVIg). IVIg is a blood product prepared from the serum of more than 1,000 donors that contains a broad range of antibodies. Some of these antibodies target a patient’s autoantibodies and neutralize them, along with other pro-inflammatory aspects of the immune system3.  The other first-line treatment targeting autoantibodies is plasma exchange (PLEX, also called plasmapheresis). PLEX “cleans” the blood of autoantibodies by replacing the liquid plasma portion of a patient’s blood with that of a donor.  PLEX also changes T and B cells in favorable ways.  A more refined form of PLEX called immunoadsorption has also been used to treat AE, and selectively removes antibodies from the blood, instead of all the other components that are also in the plasma3.  However, both PLEX and immunoadsorption only remove antibodies from the blood, not from the brain; although decreasing antibodies in the blood can lead to a decrease in the brain4.  Furthermore, all first-line treatments but especially PLEX require a good deal of patient compliance, which can limit their use if the patient is agitated or displays other behavioral problems5.

There are two main second-line immunotherapies for AE. The first is a drug that destroys B cells called rituximab.  Rituximab is actually an antibody that targets B cells, which normally go on to become antibody-producing cells.  It is expected to work particularly well in patients with LGI1 and Caspr2 autoantibodies. However, because B cells can cross into the brain and become antibody-producing cells, but rituximab cannot cross the BBB, its effects may be limited3.

The other second-line treatment is a chemotherapy drug called cyclophosphamide. Cyclophosphamide directly prevents T and B cells from multiplying, but it affects the ability of many other cells to multiply as well.  For that reason, it has some potentially serious side effects including infertility, and instead rituximab is usually the preferred second-line therapy3.

Sometimes second-line treatments are also not effective at treating AE.  When that happens, options include re-administration of first-line therapies, extended use of second-line therapies, or use of other non-steroid (steroid-sparing) drugs to suppress the immune system. For instance, the steroid-sparing drug mycophenolate mofetil prevents T and B cells from multiplying and has a better side-effect profile than cyclophosphamide3.

Other alternative treatments are also available.  One option interrupts the inflammatory effects of a molecule called interleukin-6 (IL-6).  Normally, when IL-6 binds to its receptors on immune cells, it causes B cells to multiply and mature into antibody-producing cells, and causes pro-inflammatory T cells to mature. The antibody drug tocilizumab targets the IL-6 receptor and prevents these inflammatory processes.  A molecule related to IL-6, IL-2, is also a target.  Instead of inhibiting this molecule, giving patients low doses of IL-2 activates a “good” type of T cell called regulatory T cells that help the body shut down autoimmune responses.  Another option, bortezomib, directly targets antibody-producing cells, instead of their immature B cell precursors3.

Even if AE is successfully treated, sometimes the disease can relapse.  Relapses could be caused by some antibody-producing cells that can survive for many months, which are not targeted by treatments.  Many of the therapies described above, including the first-line treatments, steroid-sparing agents, and rituximab, have been used as maintenance therapy to try and prevent this from occurring.  However, the length of time patients should continue to receive treatment is unknown, and can range from 6 months to several years depending on the patient’s condition and doctor’s opinion3.

In addition to immunotherapy, other important aspects of treatment include supportive care (particularly while in the hospital); treatment of symptoms such as seizures, spasms, and psychiatric issues; and rehabilitation1.  While responses to tumor removal and immunotherapy are often seen within a few weeks, it may take years for patients to return to normal7.  As more is discovered about which aspects of the immune system are involved in each subtype of AE, hopefully more directed treatments will become available.